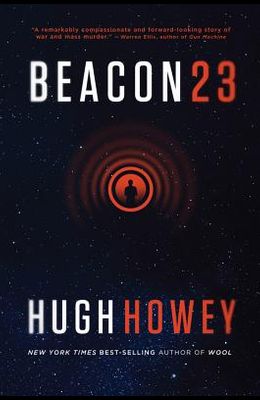 From the Back Cover Junk food, but not the kind you feel guilty about. Warren Ellis, author of Gun Machine For centuries, men and women have manned lighthouses to ensure the safe passage of ships. It is a lonely job, and a thankless one for the most part. Until something goes wrong. Until a ship is in distress. In the twenty-third century, this job has moved into outer space. A network of beacons allows ships to travel across the Milky Way at many times the speed of light. These beacons are built to be robust. They never break down. They never fail. At least, they aren't supposed to. With Beacon 23 best-selling author Hugh Howey delivers white-knuckle suspense, with aliens, war, and madness all combining in a story of one man living aboard a beacon and his battle against the solitary blackness of space. HUGH HOWEY is the author of the award-winning Molly Fyde saga and the New York Times and USA Today best-selling Silo trilogy ( Wool, Shift, and Dust ). The Wool Omnibus won Kindle Book Review's 2012 Indie Book of the Year Award and has been translated in forty countries.