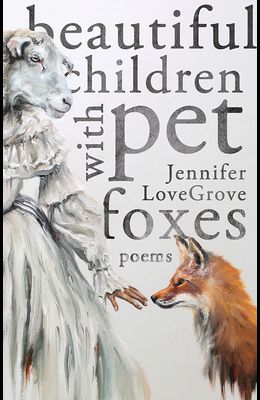 Beautiful Children with Pet Foxes , the new collection of poetry from Giller Prize-longlisted writer Jennifer LoveGrove, attempts to make sense of a difficult and unsettling world, where one need not look much further than their own communities to witness acts of trauma and absurdity. Here, we're haunted by the ghosts of alienation, trauma, delusion, and fear that the past decade has instilled in us, and bear witness to moments of extreme crisis--in emotional breakdowns, the failures of the mental health system, the lack of support for the most vulnerable members of society, and the impact of psychosis not only on the ill but on those orbiting them. With inventive and startling imagery and logic, we're led on an odyssey through the terrain of unsettling dreamscapes, where a whole host of personas, both tame and wild--from humans, to foxes, moose, deer and crows, slugs, fish, beetles, mosquitos, earthworms and more--give voice to the things we can't express in our daily lives. Praise for Beautiful Children with Pet Foxes LoveGrove's poetry apprentices itself to the world we live in, pacing out the dimensions of the enclosure called the present--the enclosures of culture, history, family, and other patriarchal institutions--with a keen eye and a relentless heart. In pursuit simultaneously of holistic perception, love, and an escape route, LoveGrove invites words to hold hands in unusual combinations, enters dreams and lets consciousness run feral. There was a war going on and / ours was a very important mission, LoveGrove writes, and it's true. --Helen Guri, author of Match