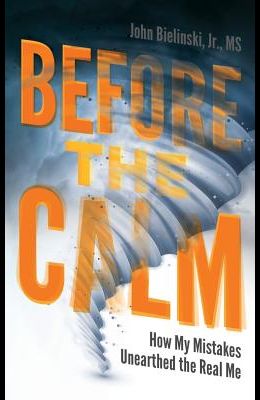 Before the Calm: How My Mistakes Unearthed the Real Me

From the outside looking in, John Bielinski had it all--combat action as a United States Marine, professional success, a terrific family. He ran marathons, completed an Ironman, won countless martial arts battles. And yet, haunted by the demons of anger, ego, and alcohol, he came to a devastating reckoning that began in a jail cell, threatened his fragile marriage, and jeopardized his career as a respected physician assistant and national medical lecturer. Compelling and relatable, Before the Calm traces Bielinski's journey downward to that fateful night and through the anguishing months and years that followed, until he emerged with genuine faith and sense of purpose. With the wry, self-aware humility that has made him one of the most popular lecturers in his field, Bielinski shows how our lowest points can become a trapdoor to success. Today, Bielinski is an accomplished international lecturer and founder-owner of one of the fastest-growing companies in the United States. By turns moving and maddening, Bielinski's story reveals the power of love, forgiveness, and faith as he struggles to rebuild his life while launching a new business. Before the Calm invites us into his darkest moments where he wanted to blame anyone but himself, and shows us how honesty and vulnerability can help transform our lives. For anyone wrestling with personal demons, Before the Calm shows a way forward to clarity, purpose, and hope.