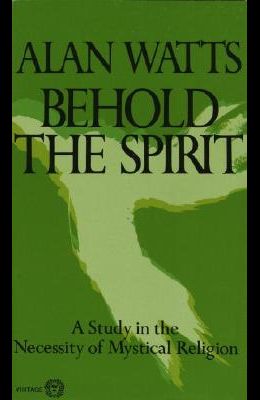 Behold the Spirit: A Study in the Necessity of Mystical Religion

A timeless argument for the place of mystical religion in today's world, from the perfect guide for a course correction in life (Deepak Chopra). Drawing on his experiences as a former priest, Watts skillfully explains how the intuition of Eastern religion--Zen Buddhism, in particular--can be incorporated into the doctrines of Western Christianity, allowing people of all creeds to enjoy a deeper, more meaningful relationship with the spiritual in our present troubled times.

From the Back Cover 'I regard the book as one of the best-in fact the only first-rate-book in recent years in the field of religion. It gets to the fundamental problem, it honestly sees the weaknesses of contemporary Protestantism, and it attempts to diagnose and cure the evil in the only way a cure can be effected, namely by a doctrine with content at the basic metaphysical level.'-F.S.C. Northrop
From the front Cover This study of the necessity of mystical religion, also shows how traditional Western doctrine can be reconciled with the intuitive religion of the Orient.