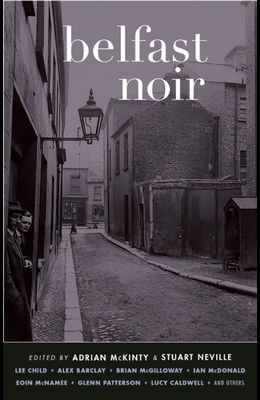 The works are short, allowing readers to savor each snippet or devour the entire compelling book in a day, depending on just how deliciously gloomy they're feeling. -- Shelf Awareness , Starred review All the stories are compelling and well executed...Great writing for fans of noir and short stories, with some tales close to perfection. -- Library Journal , Starred review Belfast Noir ] zooms in on Northern Ireland's capital city, whose history surely more than qualifies it as a breeding ground for noir. -- Booklist The choices made by editors McKinty and Neville celebrate lowlifes, convicts, hookers, private eyes, cops and reporters, and, above all, the gray city at the heart of each story. -- Kirkus Reviews Belfast, with its bleak, murderous history, at last gets an entry in Akashic's acclaimed noir series. -- Publishers Weekly Belfast Noir is one of the strongest entries in Akashic's admirable City Noir series....all stories] are of exceptional quality. Anyone with a fondness for noir, an interest in the past, in contemporary Irish writing, or simply an appreciation of excellent prose should snap this one up. -- Reviewing the Evidence Singapore Noir , like Belfast Noir , once again proves that Akashic Books' noir series is better than any travel guide. -- MysteryPeople Belfast Noir equals the high standards set by its predecessors. -- Book Chase Impossibly hard to put down...Belfast shows its true colors (ie bloodstainds) in this gritty collection. -- Barbarian Librarian It's almost like visiting Belfast]. -- Journey of a Bookseller A terrific collection. -- Escape Into Life I was blown away with what I read...This is a great anthology of modern-day noir. -- Mom Read It Launched with the summer '04 award-winning best seller Brooklyn Noir , Akashic Books continues its groundbreaking series of original noir anthologies. Each book is comprised of all-new stories, each one set in a distinct neighborhood or location within the city of the book. Reflecting a city still divided, Belfast Noir serves as a record of a city transitioning to normalcy, or perhaps as a warning that underneath the fragile peace darker forces still lurk. Featuring brand-new stories by: Glenn Patterson, Eoin McNamee, Garbhan Downey, Lee Child, Alex Barclay, Brian McGilloway, Ian McDonald, Arlene Hunt, Ruth Dudley Edwards, Claire McGowan, Steve Cavanagh, Lucy Caldwell, Sam Millar, and Gerard Brennan. From the introduction by Adrian McKinty & Stuart Neville: Few European cities have had as disturbed and violent a history as Belfast over the last half-century. For much of that time the Troubles (1968-1998) dominated life in Ireland's second-biggest population centre, and during the darkest days of the conflict--in the 1970s and 1980s--riots, bombings, and indiscriminate shootings were tragically commonplace. The British army patrolled the streets in armoured vehicles and civilians were searched for guns and explosives before they were allowed entry into the shopping district of the city centre...Belfast is still a city divided... You can see Belfast's bloodstains up close and personal. This is the city that gave the world its worst ever maritime disaster, and turned it into a tourist attraction; similarly, we are perversely proud of our thousands of murders, our wounds constantly on display. You want noir? How about a painting the size of a house, a portrait of a man known to have murdered at least a dozen human beings in cold blood? Or a similar house-sized gable painting of a zombie marching across a postapocalyptic wasteland with an AK-47 over the legend UVF: Prepared for Peace--Ready for War . As Lee Child has said, Belfast is still 'the most noir place on earth.'

0
|   0  reviews
Did you read Belfast Noir? Please provide your feedback and rating to help other readers.
Write Review