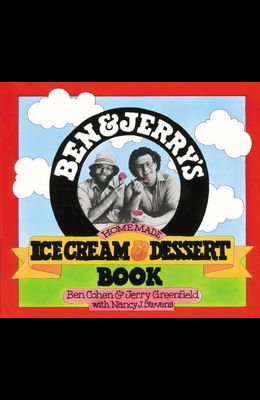 by
Ben Cohen and Jerry Greenfield and Nancy Stevens

Presenting more than 90 recipes that are easy to make with even an unsophisticated ice-cream maker, Ben & Jerry's Homemade Ice Cream & Dessert Book is spiced with bright, quirky illustrations in full color.

From the Back Cover MORE CHUNKS LESS BUNK Despite a philosophical disagreement over chunk size-Ben prefers them large and occasional while Jerry favors frequent, somewhat smaller ones-together Ben and Jerry are good friends who make great ice cream. Now they share all the recipes and techniques that have been made them nationwide heroes. Specially adapted to make at home, there are 90 recipes in all, including sorbets, summer slushes, giant sundaes and other ice-cream concoctions. All you have to do is remember Ben & Jerry's two rules of ice-cream making: RULE #1 You don't have to be a pro to make incredibly delicious ice cream. RULE #2 There's no such thing as an unredeemingly bad batch of homemade ice cream. NEW FLAVORS TO TRY: Orange Cream Dream Chocolate Chip Cookie Dough Honey Apple Raisin Walnut Peanut Butter Fudge Swirl Chocolate Superfudge Brownie FLAVORS YOU KNOW AND LOVE: Heath Bar Crunch Dastardly Mash Fresh Georgia Peach Oreo Mint BEN & JERRY REVEAL: How to break Heath Bars into the perfect bite-size chunks. How to add chunks so they don't sink to the bottom. Why you must eat honey-flavored ice cream in one sitting. Bio Ben Cohen has been a Pinkerton Guard, a garbage man, and a short-order cook. He began seriously testing ice-cream flavors at the age of five. Jerry Greenfield has worked as a lab technician. He is glad he was not admitted to medical school. Nancy Stevens is a magazine and newspaper writer who has been published in the Saturday Review, the New York Times, the Village Voice, and Working Woman.