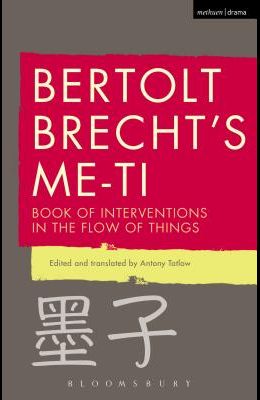 Bertolt Brecht's Me-Ti: Book of Interventions in the Flow of Things

by
Bertolt Brecht and Antony Tatlow

Bertolt Brecht's Me-ti, which remained unpublished in his own lifetime, now appears for the first time in English. Me-ti counselled against 'constructing too complete images of the world'. For this work of fragments and episodes, Brecht accumulated anecdotes, poems, personal stories and assessments of contemporary politics. Given its controversial nature, he sought a disguise, using the name of a Chinese contemporary of Socrates, known today as Mozi. Stimulated by his humorous aphoristic style and social focus, as well as an engrained Chinese awareness of the flow of things, Brecht developed a practical, philosophical, anti-systematic ethics, discussing Marxist dialectics, Lenin, Hitler, Stalin, the Moscow trials, and the theories behind current events, while warning how ideology makes people the 'servants of priests'. Me-ti is central to an understanding of Brecht's critical reflections on Marxist dialectics and his commitment to change and the non-eternal, the philosophy which informs much of his writing and his most famous plays, such as The Good Person of Szechwan . Readers will find themselves both fascinated and beguiled by the reflections and wisdom it offers. First published in German in 1965 and now translated and edited by Antony Tatlow, Brecht's Me-ti: Book of Interventions in the Flow of Things provides readers with a much-anticipated accessible edition of this important work. It features a substantial introduction to the concerns of the work, its genesis and context - both within Brecht's own writing and within the wider social and political history, and provides an original selection and organisation of texts. Extensive notes illuminate the work and provide commentary on related works from Brecht's oeuvre.