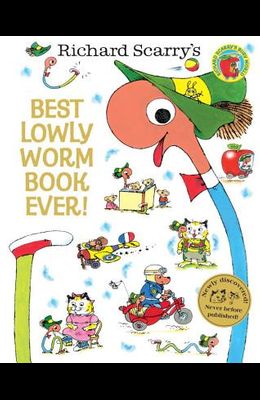 The debut of a newly discovered, never before published, classic-in-the-making from Richard Scarry is cause for joyous celebration Join Richard Scarry's most beloved character, Lowly Worm, in this fun, engaging picture book. It's quite the busy day for Lowly Worm. Whether he is at school, on the farm, helping his friends, or zooming about in his apple car, Lowly always gives young readers plenty to see and discover. Learning new words, counting along, and finding their favorite characters in the illustrations, children will repeatedly pore over this newly discovered Richard Scarry gem, lovingly completed by his son, Huck Scarry.