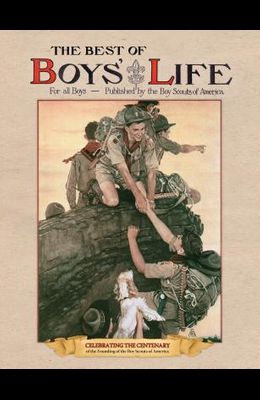 by
Boy Scouts of America

Celebrating the 100th anniversary of Boy Scouts of America, The Best of Boys' Life highlights the very best pieces published in the organization's magazine, including science fiction by Isaac Asimov and Ray Bradbury, illustrations by Norman Rockwell, photography by Ansel Adams, and pieces by sporting heroes of yesteryear.

From the Back Cover Boys' Life, the essential magazine for all Boy Scouts of America, was launched in 1911 and went on to become one of the most popular youth magazines in America. Every month it features news, stories, jokes, and practical how-to instructions invaluable to all Scouts. - Wilderness Survival and Other Exciting Activities- Amazing Articles by All-American Heroes- Thrilling Short Stories by Literary Giants- Boy Scout Games, Jokes, Puzzles, Comic Strips, and Much, Much More . .
From the front Cover From its 1911 black-and-white debut with a cover price of a nickel to the full-color, glossy publication of today, with a circulation of 1.1 million, Boys' Life has become an American institution and one of the nation's most popular youth magazines. It has entertained millions of boys while also teaching them how to live life resourcefully, wisely, and well. It has featured the work of many famous writers--including Isaac Asimov, Ray Bradbury, Arthur C. Clarke, Alex Haley, Robert A. Heinlein, and Isaac Bashevis Singer. Among the artists and photographers whose work has graced its pages are Ansel Adams, Salvador Dali, and Norman Rockwell. Pieces exclusively written by sporting heroes of yesteryear include articles by Willie Mays, Jesse Owens, and Johnny Unitas. Also included are tips on how to light fires without matches, how to survive in the desert, and everything you need to know to Be Prepared for an Emergency, along with special features such as The New Age of Exploration by John Glenn Jr. and How I Learned to Fly by Orville Wright.Boys' Life is today a magazine that not only continues its original mission to furnish the Boy Scouts with a paper they may consider their own, but also speaks to an audience of all boys. It features Scouting outings, fiction, hobbies, games, profiles of young achievers, nature, science, entertainment, comics, jokes, and more. The Best of Boys' Life brings together a choice selection of material, reproduced in facsimile form, that has appeared in the magazine over the past century. Highlighting the magazine's key attractions, it is divided into six categories: Survival, Scouting Life, Sports, News, Stories, and Features. For any boy, or anyone who is still a boy at heart, The Best of Boys' Life will be a treasured keepsake for years to come. Includes full-color facsimiles of articles and features such as: SURVIVALScoutcraft: Build a Real Igloo The Pedro Patrol Lights Fires Without MatchesWinter Survival in the Rockies SCOUTING LIFEAppeal to the American Boy, by Theodore RooseveltHow to Get a JobDeath Valley Adventure SPORTSSecrets of a Champion Athlete, by Jesse OwensHow I Play the Outfield, by Willie MaysPower in the Pivot, Kareem Abdul-Jabbar NEWS The World's Biggest Bomber The Coming Decades in Space, by Isaac Asimov (June 1972)Our Country Is At War (May 1917) STORIES The Man, by Ray Bradbury The King of Mazy May, by Jack LondonThe Sunjammer, by Arthur C. Clarke FEATURES How I Learned to Fly, by Orville Wright The New Age of Exploration, by John Glenn Jr.Exploring Mars, by Dr. R. S. Richardson