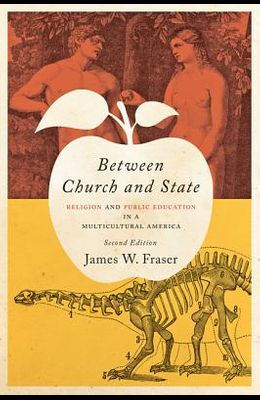 Between Church and State: Religion and Public Education in a Multicultural America

Today, the ongoing controversy about the place--or lack of place--of religion in public schools is a burning issue in the United States. Prayer at football games, creationism in the classroom, the teaching of religion and morals, and public funding for private religious schools are just a few of the subjects over which people are skirmishing. In Between Church and State , historian and pastor James W. Fraser shows that these battles have been going on for as long as there have been public schools and argues there has never been any consensus about what the separation of church and state means for American society or about the proper relationship between religion and public education. Looking at the difficult question of how private issues of faith can be reconciled with the very public nature of schooling, Fraser's classic book paints a complex picture of how a multicultural society struggles to take the deep commitments of people of faith into account--including people of many different faiths and no faith. In this fully updated second edition, Fraser tackles the culture wars, adding fresh material on current battles over public funding for private religious schools. He also addresses the development of the long-simmering evolution-creationism debate and explores the tensions surrounding a discussion of religion and the accommodation of an increasingly religiously diverse American student body. Between Church and State includes new scholarship on the role of Roger Williams and William Penn in developing early American conceptions of religious liberty. It traces the modern expansion of Catholic parochial schools and closely examines the passage of the First Amendment, changes in American Indian tribal education, the place of religion in Booker T. Washington and W. E. B. Du Bois's debates about African American schooling, and the rapid growth of Jewish day schools among a community previously known for its deep commitment to secular public education.