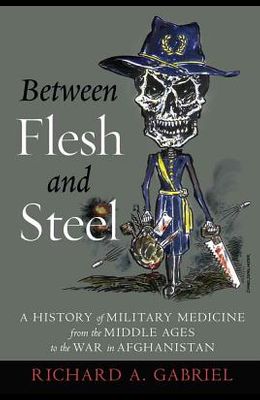 Between Flesh and Steel: A History of Military Medicine from the Middle Ages to the War in Afghanistan

Over the last five centuries, the development of modern weapons and warfare has created an entirely new set of challenges for practitioners in the field of military medicine. Between Flesh and Steel traces the development of military medicine from the Middle Ages to the twenty-first century. Military historian Richard A. Gabriel focuses on three key elements: the modifications in warfare and weapons whose increased killing power radically changed the medical challenges that battle surgeons faced in dealing with casualties; advancements in medical techniques that increased the effectiveness of military medical care; and changes that finally brought about the establishment of military medical care systems in modern times. Chronological and cross-cultural, Between Flesh and Steel is the most comprehensive book on the market about the evolution of modern military medicine. Richard A. Gabriel is a distinguished professor in the Department of History and War Studies at the Royal Military College of Canada and in the Department of Defence Studies at the Canadian Forces College in Toronto. He is a former U.S. Army officer and the author of more than forty books, including Man and Wound in the Ancient World: A History of Military Medicine from Sumer to the Fall of Constantinople (Potomac, 2011) and The Madness of Alexander the Great and the Myth of Military Genius.