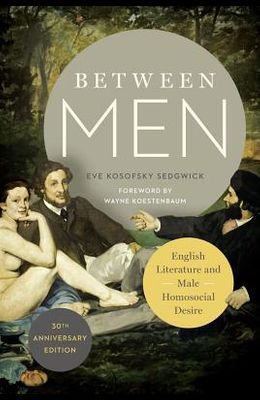 First published in 1985, Between Men was a decisive intervention in gender studies, a book that all but singlehandedly dislodged a tradition of literary critique that suppressed queer subjects and subjectivities. With stunning foresight and conceptual power, Eve Kosofsky Sedgwick's work opened not only literature but also politics, society, and culture to broader investigations of power, sex, and desire, and to new possibilities of critical agency. Illuminating with uncanny prescience Western society's evolving debates on gender and sexuality, Between Men still has much to teach us. With a new foreword by Wayne Koestenbaum emphasizing the work's ongoing relevance, Between Men engages with Shakespeare's Sonnets , Wycherley's The Country Wife , Sterne's A Sentimental Journey Through France and Italy , Hogg's The Private Memoirs and Confessions of a Justified Sinner , Tennyson's The Princess , Eliot's Adam Bede , Thackeray's The History of Henry Esmond, Esq. , and Dickens's Our Mutual Friend and The Mystery of Edwin Drood , among many other texts. Its pathbreaking analysis of homosocial desire in Western literature remains vital to the future of queer studies and to explorations of the social transformations in which it participates.