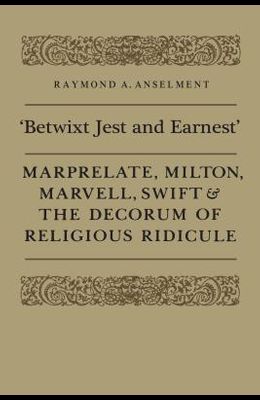 by
Raymond a Anselment

Marprelate, Milton, Marvell, and Swift are among the best prose satirists in a remarkably rich literary era. Focusing on these key figures, ' Betwixt Jest and Earnest ' examines the theory and practice of religious prose in the sixteenth and seventeenth centuries. Recognizing the difficulties inherent in attempting to transform unimaginative animadversion into effective satire, it analyses the ways in which Marprelate's tracts, Milton's anti-prelatical satires, Marvell's The Rehearsal Transpros'd , and Swift's A Tale of a Tub variously resolve the decorum of religious satire. Although the study is not specifically an intellectual history or a rigid definition of religious attitudes towards jest, it does bring together basic symptoms of altering sensibilities in the period. Marprelate, Milton, Marvell, and Swift represent diverse religious dispositions, but they share a similar satiric vision. Each recognizes the central importance of manner, and all develop dramatic satire heavily dependent on character, an emphasis which often displaces the immediate issues contested, but never obscures the larger concerns the satirists pursue. Their preoccupations with the nature of tradition, their emphasis on the self, and their sensitivity to language reflect similar involvements in questions of certainty and absolutism. The virtues and abuses they find in such central questions are not unique to them or their time, but their emphases are, for they wrote in an age in which sensitive men could confront revolution and reaction with an assurance not easily attainable once that era had passed.