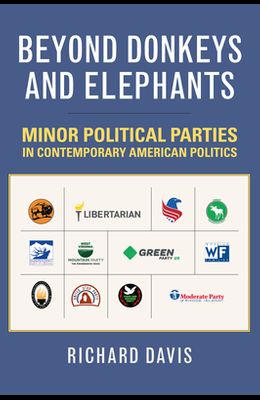 Confronted with two historically unpopular presidential candidates, the American electorate in 2016 delivered a shock to the political system. Less noted, amid the drama of Donald Trump's victory, was the substantial share of the vote won by minor parties and independent candidates--one of whom, Libertarian Gary Johnson, put in the best third-party performance since Ross Perot's 1996 Reform Party bid. Even more surprising, at the state-level minor-party candidates made greater inroads, in some states combining to win over 10 percent of the vote. At a time of increasing dissatisfaction with a two-party system, this book provides a much-needed look at the current political party alternatives in the United States. In Beyond Donkeys and Elephants , the chapter authors survey the present political landscape but also delve into the history of third parties and consider their likely directions and prospects looking forward. The most comprehensive account ever written of contemporary minor political parties in the United States, Beyond Donkeys and Elephants covers parties at the national, regional, and state levels. It discusses the well-known alternatives--including the Green, Constitution, and Libertarian Parties--as well as niche state-level parties such as the Mountain Party in West Virginia, the Vermont Progressive Party, the Moderate Party of Rhode Island, and the United Utah Party. This book also places the current resurgence of minor parties in historical context, examining the larger political forces at play. With its case studies past and present, its insights into the formation and nature of minor parties, and its in-depth analysis of why and when such parties emerge, this book affords readers across the political spectrum a unique opportunity to understand and evaluate alternatives as the two-party system undergoes ever greater strains in the coming years.