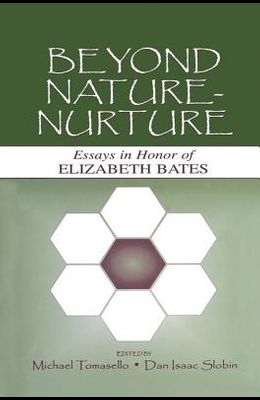 Beyond Nature-Nurture: Essays in Honor of Elizabeth Bates

by
and Michael Tomasello and Dan Isaac Slobin
$74.85
Select Format

Beyond Nature-Nurture: Essays in Honor of Elizabeth Bates is a very special tribute to the University of California at San Diego psycholinguist, developmental psychologist, and cognitive scientist Elizabeth Ann Bates, who died on December 14, 2003 from pancreatic cancer. Liz was a force of nature; she was also a nurturing force, as is evidenced by this collaborative collection of chapters written by many of her closest colleagues and former students. The book covers a brilliant career of wide-ranging interdisciplinary interests, such as the brain bases of language in children and adults; language and cognitive development in normal and neurologically impaired populations of children; real-time language processing in monolinguals and bilinguals; and crosslinguistic comparisons of language development, language use, and language loss. In this volume the contributors provide up-to-date reviews of these and other areas of research in an attempt to continue in the directions in which she has pointed us. The genius of Bates is founded on a deep dedication to science, supported by an enduring sense of humor. The volume is introduced by the editors' collection of Bates's aphorisms, the wisdom of which guide much of the field today: T]he human capacity for language could be both innate and species-specific, and yet involve no mechanisms that evolved specifically and uniquely for language itself. Language could be viewed as a new machine constructed entirely out of old parts. (Bates & MacWhinney, 1989) The volume also contains a list of her many important publications, as well as some personal reflections of some of the contributors, noting ways in which she made a difference in their lives. Beyond Nature-Nurture: Essays in Honor of Elizabeth Bates appeals to international scholars in the fields of developmental psycholinguistics, cognitive science, crosslinguistic research, and both child and adult language disorders. It is a state-of-the-art overview of many areas of cognitive science, and can be used in a graduate-level classroom in courses designed as seminars in any of these topics.

List of All Editions of Beyond Nature-Nurture: Essays in Honor of Elizabeth Bates