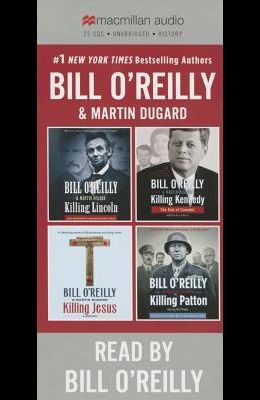 Readers around the world have thrilled to Killing Lincoln , Killing Kennedy , Killing Jesus , and Killing Patton -riveting works of nonfiction that journey into the heart of the most famous murders in history. Now all four volumes are together for the first time as an audio box set. Killing Lincoln recounts one of the most dramatic stories in American history-how one gunshot changed the country forever in this #1 New York Times Bestseller. Killing Kennedy conveys how a sequence of gunshots on a Dallas afternoon not only killed a beloved president but also sent the nation into the cataclysmic division of the Vietnam War and its culture-changing aftermath. Killing Jesus takes listeners inside Jesus's life, portraying the seismic political and historical events that made his death inevitable-and changed the world forever. Killing Patton tells the story of the final year of the war and recounts the events surrounding Patton's tragic demise.