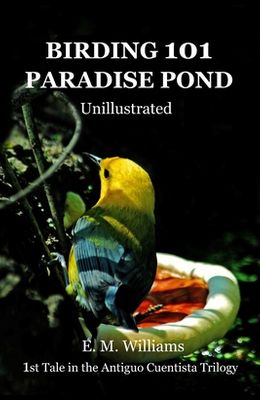 Like Canterbury Tales, The Antiguo Cuentista Trilogy-Birding 101 Paradise Pond, Dancing Flowers - Chasing Moon, and Cruising for a Bruising-provides adult vignettes of a group of travelers. Unlike Canterbury Tales, they don't tell stories to win a contest, they live their stories, and the prizes are happy, contented lives.For most of them, children and religion are among things that give live meaning. Pursuits and obsessions make life worth living. Though their lives are constrained by laws, conventions, traditions and more, they're human, and humans don't have the best track records when it comes to facing temptation. They go to great lengths and take inordinate risks while pursuing their dreams. Those who play by the rules find it's no assurance of success, because rules are subject to change.But why make things easy? The pilgrims in the Antiguo Cuentista Trilogy encounter obstacles to achieving their goals. They come upon detours. Trolls and fiends lie in wait. Not all the pilgrims have the others' best interests as heart. Even the best wander and aren't true to their ideals as their lives intertwine with those of their fellow voyagers. In other words, they're sort of like us.The tales are also educational travelogues. Readers of Birding 101 Paradise Pond will discover feathered wonders that boggle the imagination, as they tour birding sites along the Great Texas Coastal Birding Trail. In Dancing Flowers - Chasing Moon, they'll mentally wriggle their toes into New Mexico's white gypsum sands and tour amazing venues in the state's verdant mountains. Those who set sail with the characters in Cruising for a Bruising will enjoy shipboard games and exciting excursions in the ports of call.Magical realism plays a part. One can expect a ghost, a seer, and a witch or two, because many of us and our friends have been impacted by the paranormal. The good news is that those in the trilogy are mostly benevolent. So long as the characters stay on their good sides.Be forewarned. The plots and scenarios are for mature readers. A little religious, a little salty and quirky, sometimes suspenseful and thrilling, they are mostly fun and pleasant reads. And since Antiguo Cuentista wants his tales to be enjoyed by everyone, abridged versions that eliminate the colorful language and evocative and graphic scenes are, or will be, available.Tale 1Birding 101 Paradise PondIt's said that two wrongs don't make a right. Which begs the question: how many does it take? Strange, how the simplest and best course of action is often the one discarded. One misstep leads to another, then another....Staid grandpa Jim Smith pictures bird photography as the perfect pastime for his golden years. So, when his wife, Marsha, backs out of their RV club's annual trip to Port Aransas, Texas, at the last minute, he leaves without her. After all, what could more idyllic than spending a leisurely two weeks enjoying the company of close friends and recording the jeweled, feathered majesties at the town's world renown birding sites? At Paradise Pond, he meets troubled nature photographer Mary Elizabeth. His gentleness soothes her anguished spirit, and she nurtures his photographic skills. But acts of kindness aren't without peril.A mother's action, taken for love and protectiveness, awakens monsters. A friend's premonition and manipulations sets the couple on a precarious course. But those only compound our travelers predicament as they struggle with forces that threaten to destroy their worlds and consume their souls. In the Emergency Room, they reflect on the irony of human foibles, the plethora of bright, shiny new skeletons bulging formerly pristine closets, how their actions are affecting family and friends-and press on.So, sit back, enjoy the locales, and second-guess the characters as they wind their way through the first of a trilogy of stages in their lives.