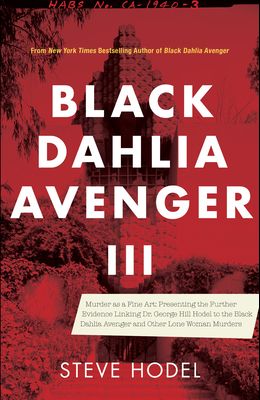 As heard about in the hit podcast Root of Evil In Black Dahlia Avenger III bestselling author and veteran LAPD homicide detective Steve Hodel presents his four-year follow-up investigation into Los Angeles's 1947 Black Dahlia murder and other serially connected 1940s Lone Woman Murders. This edition includes ten new chapters with all new evidence and forensics further linking his father, Dr. George Hill Hodel to the 1947 Black Dahlia Murder, as well as the 1945 Chicago Lipstick Murders, the Manila Jigsaw Murder and the 1969 San Francisco Bay Area Zodiac murders. Black Dahlia Avenger II (2018) is the sequel to the 2003 &#65279; New York Times &#65279;Bestseller and Edgar-award winning &#65279; Black Dahlia Avenger , &#65279;and it raises the investigative bar from rock solid to beyond a reasonable doubt--the legal requirement for readers to arrive at a finding of GUILTY.