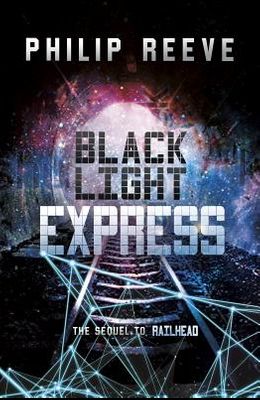 Book #2 in the Railhead Series
by
Philip Reeve

With superb world building, gripping action, and ruthless political intrigue, Black Light Express delivers a breathtaking adventure into the darkest depths of space and is sure to please sci-fi fans and foes alike. At the edge of the Great Network, a small-time thief and an android girl ride aboard a sentient train. They hurtle toward the unknown, ready to see what lies beyond the end of the universe. But Zen Starling and Nova leave behind worlds on the brink of chaos. Old rulers are dead, and now young Threnody Noon sits precariously on the throne. Unrest spreads like a virus, a rival corporate family grows hungry for power, and the once tranquil Empire seems bound for railwar and ruin. Watching everything are the Guardians--the mysterious god-like AIs to whom people of the Network offer their prayers and praises. But even gods have secrets. Secrets the so-called benevolent deities would do anything to keep hidden deep within the farthest reaches of existence. Return to the exciting sci-fi world of Philip Reeve in this sequel to Railhead, which received three starred reviews and was praised by Publishers Weekly as a thrilling and imaginative escapade.