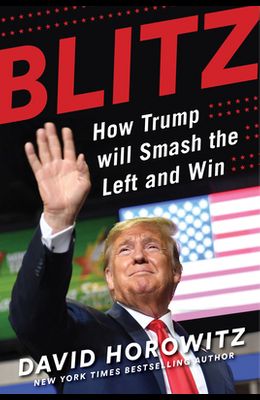 Blitz: Trump Will Smash the Left and Win

David Horowitz has been rightfully standing up to crazy leftists for decades. If you're interested in debating deranged liberals with facts, you won't want to miss this latest book. - Donald Trump, Jr. David Horowitz is one of the boldest and most brilliant thinkers and writers of our time. His latest blockbuster Blitz spells out why Trump will be reelected and how it will put the left in a deep sink hole of their own making. A MUST read for those who want to better understand what is really happening in the 'idea war' for the soul of America. - Gov. Mike Huckabee David Horowitz has written an indispensable book - Blitz -- explaining why today's Democrats are so dangerous and why President Trump is their nemesis. - Mark R. Levin, New York Times bestselling author of Unfreedom of the Press David Horowitz has been at the center of our national conversations about politics and culture for more than fifty years. 'Blitz' is the latest must-read from Horowitz: insightful, hard-hitting, controversial, and uncompromising. Ignore him at your peril.--Peter Schweizer, New York Times bestselling author of Clinton Cash and Profiles in Corruption This book is not simply a very, very good book. It is a great book. I rarely use that term, and I read a lot of books. This is the book your anti-Trump relatives and friends should read. It is a fact-based, highly foot-noted, defense of Donald Trump as president of the United States -- AND it is as clear a moral indictment of the anti-Trump left as has been written. It also has the virtues of being as clear as water and as readable as a page-turning novel. Finally, it is written by David Horowitz whom I consider a modern-day prophet. Prophets hated evil and told the truth. -- Dennis Prager, President of PragerU, New York Times bestselling author David Horowitz is an icon and leader in the conservative movement whose books and writings have shaped conservative policies and thinking for decades. Blitz: Trump Will Smash the Left and Win provides unparalleled insight into the current political climate and David's expertise and experience give him a unique understanding of how we got here and what it means for 2020 elections. - Sean Spicer, Host of Spicer & Co. , Newsmax TV David Horowitz hits it perfectly in this book. Horowitz understands the left better than anyone else in America. He recognizes their malevolent goals and how to stop them. This is a must read book - Charlie Kirk, New York Times bestselling author of The MAGA Doctrine In his New York Times and critically-acclaimed bestsellers, David Horowitz has become one of the most highly-respected defenders of the freedoms America stands for. In Blitz , Horowitz tackles the high-stakes upcoming presidential election. This book provides a blueprint for how Trump will once again stun his competitors - winning over key and surprising new supporters and finally vanquish the left wing of the Democratic party, keeping America free and prosperous.

From the Back Cover ADVANCE PRAISE FOR BLITZ If you're interested in debating deranged liberals with facts, you won't want to miss this book. -- Donald Trump, Jr. BLITZ is a MUST-read for those who want to better understand what is really happening in the 'idea war' for the soul of America. -- Governor Mike Huckabee An indispensable book-- BLITZ --explaining why today's Democrats are so dangerous and why P resident Trump is their nemesis. -- Mark R. Levin, New York Times Bestselling Author BLITZ is the latest must-read from Horowitz: insightful, hard-hitting, controversial, and uncompromising. Ignore him at your peril. -- Peter Schweizer, New York Times Bestselling Author This is the book your anti-Trump relatives and friends should read...as clear a moral indictment of the anti-Trump left as has been written. -- Dennis Prager, President of PragerU Unparalleled insight into the current political climate, how we got here and what it means for 2020 elections. -- Sean Spicer, Host of Spicer & Co. , Newsmax TV Horowitz recognizes the left's malevolent goals and how to stop them. This is a must-read book! -- Charlie Kirk, New York Times Bestselling Author
From the front Cover BUCKLE UP--2020 WILL BE THE POLITICAL RIDE OF YOUR LIFE! Ever since he first announced his presidential quest--after coming down the escalator of New York's Trump Tower--the media, the establishment, and his critics in both parties belittled, demeaned, mocked, and even laughed at Donald Trump. But the billionaire has had the last laugh. And, as David Horowitz reveals in BLITZ: Trump Will Smash the Left and Win , Trump has been-- and will continue to be--the Democrats' worst nightmare. BLITZ reveals the attacks made against Trump have been the most brutal ever mounted against a sitting President of the United States. Blinded by deep-seated hatred of his person and his policies, the left even desperately tried to oust Trump in a failed impeachment bid. Horowitz shows that their very attacks--targeting a man whose mission has been to Drain the Swamp and Make America Great Again backfired, turning Trump himself into a near martyrwhile igniting the fervor of his base. With the 2020 election upon us, New York Times bestselling author David Horowitz chronicles the brutal battles, bitter backlash, and leftwing lies Trump has faced as Democrats repeatedly try to sabotage his Presidency. You'll discover the left's terrifying socialist and, in some cases, communist agendas as you've never seen them before. Trump's response? In the meantime, he's going to steamroll this opposition in November using the same playbook he has used to win before. In BLITZ you will find shocking revelations: The 9 biggest dangers to America the left poses--their agenda will blow your mind. Show me the money: naming the billionaires and fat cats really out to get Trump. How patriotism suddenly became white nationalism linking Trump to Hitler and the KKK . The growing secularism of the left and how the hate pushed against Christians will backfire. Why every effort to demonize Trump and his supporters is failing like crazy. Obama's agenda: how the former President casts a much greater shadow over Trump's political woes than you ever imagined. The Genius: how Trump's brilliant strategy has worked and will continue to work, making him President again in 2021! The effort to remove and destroy our duly elected President may be the greatest challenge America has faced since the Civil War, explains Horowitz. For the first time BLITZ exposes the left's strategy to take down Trump, and how Trump not only beat them at their own game, but how he's turning the tables on them to achieve a stunning reelection win come November. David Horowitz is a noted conservative commentator and prolific author of critically acclaimed books including New York Times bestseller BIG AGENDA: President Trump's Plan to Save America and DARK AGENDA: The War to Destroy Christian America . He is the founder and CEO of the David Horowitz Freedom Center in Los Angeles, California.