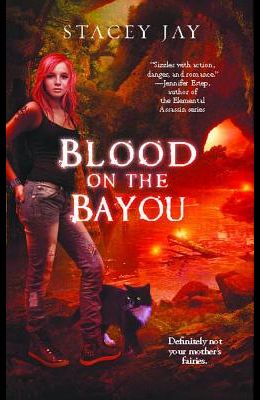 Blood on the Bayou

The second book in a new urban fantasy series featuring mosquito-sized fairies with poisonous bites that drive humans insane. It's only been three weeks since Annabelle helped solve the murder of Grace Beauchamp, and in the process, she discovered a secret world of invisible, magic-working people who have decided she might have what it takes to join their ranks. As best as she can determine, Annabelle's attack by a group of fairies has infected her with paranormal ability she did not previously possess, including being able to mentally move objects and heal wounds. Her new abilities appear to have few negative side effects, aside from creepy dreams. But would that change if she stopped injecting herself with the mystery drug delivered to her by the even more mysterious Tucker, one of the Invisibles? Leery of trusting criminals with her health, Annabelle wishes she had someone she could talk to about the changes in her life. Enter Hitch, FBI agent and Annabelle's ex, who's back in Donaldsonville on an off-the-books investigation. Hitch suspects that there's a government-funded illegal lab that's developing a controversial fairy-killing spray that could adversely affect the existence of every living thing in the delta--including humans. And Hitch and Annabelle will have to find a way to work together if they're going to find a way to shut it down.

List of All Editions of Blood on the Bayou