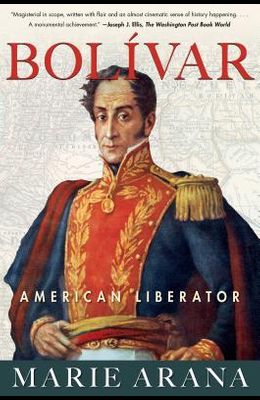 A brilliant biography that reads like a wonderful novel but is researched like a masterwork of history (Walter Isaacson, author of Steve Jobs ), this is the epic story of the famous South American general and statesman Sim n Bol var. SIM N BOL VAR -- El Libertador --freed six countries from Spanish rule and is still the most revered figure in South America today. He traveled from Amazon jungles to the Andes mountains, engaged in endless battles and forged fragile coalitions of competing forces and races. He lived an epic life filled with heroism, tragedy (his only wife died young), and legend (he was saved from an assassination attempt by one of his mistresses). In Bol var , Marie Arana has written a sweeping biography that is as bold and as passionate as its subject. Drawing on a wealth of primary documents, Arana vividly captures the early nineteenth-century South America that made Bol var the man he became: fearless general, brilliant strategist, consummate diplomat, dedicated abolitionist, gifted writer, and flawed politician. A major work of history, Bol var not only portrays a dramatic life in all its glory, but is also a stirring declaration of what it means to be South American.