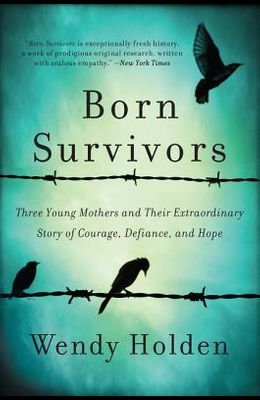 The Nazis murdered their husbands but concentration camp prisoners Priska, Rachel, and Anka would not let evil take their unborn children too--a remarkable true story that will appeal to readers of The Lost and The Nazi Officer's Wife, Born Survivors celebrates three mothers who defied death to give their children life. Eastern Europe, 1944: Three women believe they are pregnant, but are torn from their husbands before they can be certain. Rachel is sent to Auschwitz, unaware that her husband has been shot. Priska and her husband travel there together, but are immediately separated. Also at Auschwitz, Anka hopes in vain to be reunited with her husband. With the rest of their families gassed, these young wives are determined to hold on to all they have left--their lives, and those of their unborn babies. Having concealed their condition from infamous Nazi doctor Josef Mengele, they are forced to work and almost starved to death, living in daily fear of their pregnancies being detected by the SS. In April 1945, as the Allies close in, Priska gives birth. She and her baby, along with Anka, Rachel, and the remaining inmates, are sent to Mauthausen concentration camp on a hellish seventeen-day train journey. Rachel gives birth on the train, and Anka at the camp gates. All believe they will die, but then a miracle occurs. The gas chamber runs out of Zyklon-B, and as the Allied troops near, the SS flee. Against all odds, the three mothers and their newborns survive their treacherous journey to freedom. On the seventieth anniversary of Mauthausen's liberation from the Nazis by American soldiers, renowned biographer Wendy Holden recounts this extraordinary story of three children united by their mothers' unbelievable--yet ultimately successful--fight for survival.

From the Back Cover An astonishing and deeply moving work.-- Booklist (starred review) An engrossing, intense, and highly descriptive narrative chronicling the ghastly conditions three pregnant women suffered through at the hands of the Nazis.-- Kirkus Reviews Among the millions of Holocaust victims sent to Auschwitz II-Birkenau in 1944, Priska, Rachel, and Anka each pass through the concentration camp's infamous gates with a secret. Separated from their husbands and strangers to one another, they are pregnant and scared. After losing so many other loved ones to the Nazis, these women are determined to hold on to all they have left: their lives and those of their unborn babies. Born Survivors follows them as, against all the odds, they give birth to their babies and go on to build new lives with their children after World War II. Theirs are stories of hardships and miracles as they narrowly escape the clutches of Dr. Josef Mengele at Auschwitz; conceal their condition after they are sent to a Nazi slave-labor camp, where they are half-starved and almost worked to death; and as the Allies close in, survive a seventeen-day train journey to Mauthausen in Austria. By the time they arrive, all three babies have been born--but because the camp has run out of Zyklon B, their lives and those of their mothers are saved. Sixty-five years later, the three miracle babies share a remarkable, inspirational story of three mothers who defied death at the hands of the Nazis to give their children life.