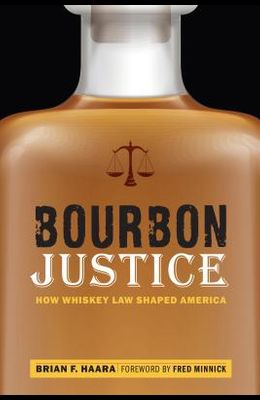 Bourbon whiskey has made a surprising contribution to American legal history. Tracking the history of bourbon and bourbon law illuminates the development of the United States as a nation, from conquering the wild frontier to rugged individualism to fostering the entrepreneurial spirit to solidifying itself as a nation of laws. Bourbon is responsible for the growth and maturation of many substantive areas of the law, such as trademark, breach of contract, fraud, governmental regulation and taxation, and consumer protection. In Bourbon Justice Brian Haara delves into the legal history behind one of America's most treasured spirits to uncover a past fraught with lawsuits whose outcome, surprisingly perhaps, helped define a nation. Approaching the history of bourbon from a legal standpoint, Haara tells the history of America through the development of commercial laws that guided our nation from an often reckless laissez-faire mentality, through the growing pains of industrialization, and past the overcorrection of Prohibition. More than just true bourbon history, this is part of the American story.

Other administrative law & regulatory practice books you might enjoy