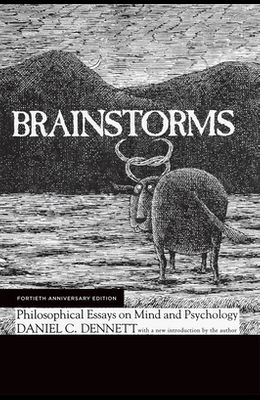 An anniversary edition of a classic in cognitive science, with a new introduction by the author.When Brainstorms was published in 1978, the interdisciplinary field of cognitive science was just emerging. Daniel Dennett was a young scholar who wanted to get philosophers out of their armchairs--and into conversations with psychologists, linguists, computer scientists. This collection of seventeen essays by Dennett offers a comprehensive theory of mind, encompassing traditional issues of consciousness and free will. Using careful arguments and ingenious thought experiments, the author exposes familiar preconceptions and hobbling intuitions. The essays are grouped into four sections: Intentional Explanation and Attributions of Mentality; The Nature of Theory in Psychology; Objects of Consciousness and the Nature of Experience; and Free Will and Personhood.This anniversary edition includes a new introduction by Dennett, Reflections on Brainstorms after Forty Years, in which he recalls the book's original publication by Harry and Betty Stanton of Bradford Books and considers the influence and afterlife of some of the essays. For example, Mechanism and Responsibility was Dennett's first articulation of his concept of the intentional stance; Are Dreams Experiences? anticipates the major ideas in his 1991 book Consciousness Explained; and Where Am I? has been variously represented in a BBC documentary, a student's Javanese shadow puppet play, and a feature-length film made in the Netherlands, Victim of the Brain.

List of All Editions of Brainstorms, Fortieth Anniversary Edition: Philosophical Essays on Mind and Psychology