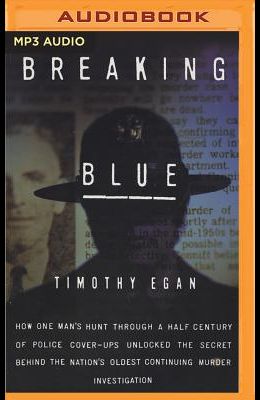 by
Timothy Egan and Malcolm Hillgartner

In 1935, the Spokane police regularly extorted sex, food, and money from the reluctant hobos (many of them displaced farmers who had fled the midwestern dust bowls), robbed dairies, and engaged in all manner of nefarious crimes, including murder. This history was suppressed until 1989, when former logger, Vietnam vet, and Spokane cop Tony Bamonte discovered a strange 1955 deathbed confession while researching a thesis on local law enforcement history. Bamonte began to probe what had every appearance of widespread police crime and a massive cover-up whose highlight was the unsolved murder of Town Marshall George Conff. The fact that many of those involved, now in their 80s and 90s, were still alive made it imperative that Bamonte unravel this mystery. The result is Breaking Blue , a white-knuckle ride through institutional corruption and cover-up that vividly documents Depression-era Spokane and an extraordinary case that few believed would ever be brought to light.