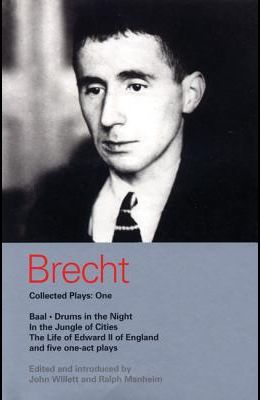 Published by Methuen Drama, the collected dramatic works of Bertolt Brecht are presented in the most comprehensive and authoritative editions of Brecht's plays in the English language. Volume One of Brecht's Collected Plays contains Brecht's first performed stage works. Baal is inspired by Brecht's student life in Augsburg and follows the life of a young poet on the rocky road to inspiration; Drums in the Night was written in response to Brecht's experience as a medical orderly in the aftermath of the First World War; and In the Jungle of Cities , set in Chicago, covers the downfall of a family that has moved from the prairies to the jungle of the big city - award-winning in its day, it was described by a leading German daily as the play that 'has given our time a new tone, a new melody, a new vision'. This volume also includes The Life of Edward II of England , a ballad-like adaptation of Marlowe's original, and five one-act plays The Beggar or the Dead Dog , Driving Out The Devil , Lux in Tenebris , The Catch and A Respectable Wedding in which the bourgeois proceedings take a hilarious turn for the unseemly. The translators are Jean Benedetti, Eva Geiser and Ernest Borneman, Richard Grunberger, Michael Hamburger, Gerhard Nellhaus, Peter Tegel and John Willett. The translations are ideal for both study and performance. The volume is accompanied by a full introduction and notes by the series editor John Willett and includes Brecht's own notes and relevant texts as well as all the important textual variants.