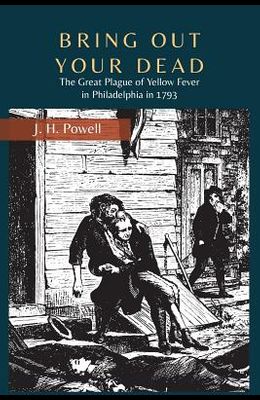 Bring Out Your Dead: The Great Plague of Yellow Fever in Philadelphia in 1793

2016 Reprint of 1949 Edition. Two parts in one volume. Full facsimile of the original edition, not reproduced with Optical Recognition Software. The first major American yellow fever epidemic hit Philadelphia in July 1793 and peaked during the first weeks of October. Philadelphia, then the nation's capital, was the most cosmopolitan city in the United States. Two thousand free blacks lived there, as well as many recent white French-speaking arrivals from the colony of Santo Domingo, who were fleeing from a slave rebellion. Major Revolutionary political figures lived there, and in the first week of September, Thomas Jefferson wrote to James Madison that everyone who could escape the city was doing so. The epidemic depopulated Philadelphia: 5,000 out of a population of 45,000 died, and chronicler Mathew Carey estimated that another 17,000 fled. In this psychological portrait of a city in terror, J. H. Powell presents a penetrating study of human nature revealing itself. Bring Out Your Dead is an absorbing account, form the original sources, of an infamous tragedy that left its mark on all it touched.

Books similiar to Bring Out Your Dead: The Great Plague of Yellow Fever in Philadelphia in 1793

List of All Editions of Bring Out Your Dead: The Great Plague of Yellow Fever in Philadelphia in 1793