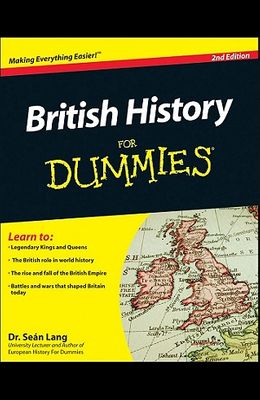 Part of the Dummies Series
by
Sean Lang

This book is a riotous, irreverent account of the people and events that have shaped Britain. Always getting those kings and queens confused? Never sure what happened when? Then you need this book. Inside you'll find rip-roaring stories of power-mad kings, executions, invasions, high treason, global empire building, and forbidden love -- not bad for a nation of stiff upper lips Revised and expanded to include the historical parliamentary elections of 2010 and the British mission in Afghanistan Accompanied by access to a timeline and 'Who's Who in British History' section on dummies.com This new edition contains an 8-page color insert so you can see who, what and where the ensuing historical action takes place

From the Back Cover Treason, plague, two world wars - and that's just for starters. Discover the fascinating history of Britain British history is a rollercoaster ride of lively stories, relentless power-grabbing, and colourful characters - and it's all in this book! Whether you confuse your Stuarts with your Tudors or are convinced the Battle of Hastings took place in 1966, this book is the perfect guide for you. Uncover rip-roaring stories of power-mad kings, executions, invasions, and high treason. Tour through the ages of Britain and take in anation at war, the building of a global empire, and tales of forbidden love - not bad for a nation of stiff upper lips. Time-travelling through the ages - understand Stone Age Britain, and move on through the Bronze Age into the Iron Age Going on an invasion - discover how the Saxons and Vikings invaded the British Isles, and how their legacy lives on today Commanding and conquering - look on as Britain builds a vast empire and delves into global domination Uncovering a right royal affair - take in the turbulent times of monarchs through the ages Meeting the children of the revolution - marvel at the industrial revolution that made Britain a superpower Moving into the modern world - witness the highs and lows of the twentieth and twenty-first centuries Open the book and find: A tour through British historyfrom the Stone Age to theInformation Age Romans, Vikings, and other invaders The roots of the Protestant Reformation and the Church of England Gladstone, Disraeli, and the pub brawls they inspired The 1980s and Margaret Thatcher - the Iron Lady British culture from Shakespeare to the Beatles Colour section packed with historical images and information Learn about: Legendary kings and queens 1066 and all that followed The rise and fall of the British Empire The battles and wars that shaped Britain