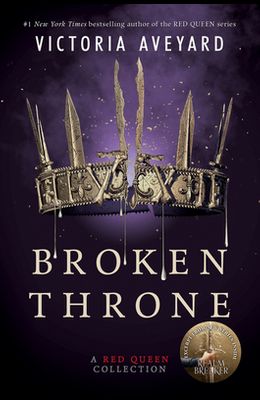 Return once more to the deadly and dazzling world of Red Queen in Broken Throne, a beautifully designed, must-have companion to the chart-topping series from #1 New York Times bestselling author Victoria Aveyard. The perfect addition to the #1 New York Times bestselling Red Queen series, this gorgeously designed package features three brand-new novellas, two previously published novellas, Steel Scars and Queen Song , and never-before-seen maps, flags, bonus scenes, journal entries, and much more exclusive content. Fans will be delighted to catch up with beloved characters after the drama of War Storm and be excited to hear from brand-new voices as well. This stunning collection is not to be missed

From the Back Cover AN UNSEATED KING searches for meaning in a world altered by war. ENEMY BROTHERS clash one final time. A DOOMED QUEEN pens words of hope to her future son. A SILVER PRINCESS trusts a Red captain with her life in the chaos of an unknown land. A YOUNG SCARLET GUARD captain finds a glimmer of hope that will light a rebellion. AND A HERO whose spark started a revolution discovers where she belongs in peace. Delve into the dark and dangerous world of Red Queen with this must-have companion, which includes three brand-new short stories as well as extra scenes, maps, family trees, flags, and much more. This masterful collection offers an entirely new look into the beloved characters in the iconic Red Queen series, where no one is as they appear, and the only certainty is betrayal.