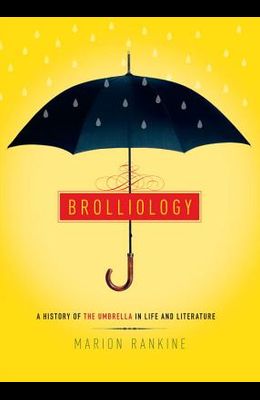 Brolliology: A History of the Umbrella in Life and Literature

A fun, illustrated history of the umbrella's surprising place in life and literature Humans have been making, using, perfecting, and decorating umbrellas for millennia--holding them over the heads of rulers, signalling class distinctions, and exploring their full imaginative potential in folk tales and novels. In the spirit of the best literary gift books, Brolliology is a beautifully designed and illustrated tour through literature and history. It surprises us with the crucial role that the oft-overlooked umbrella has played over centuries--and not just in keeping us dry. Marion Rankine elevates umbrellas to their rightful place as an object worthy of philosophical inquiry. As Rankine points out, many others have tried. Derrida sought to find the meaning (or lack thereof) behind an umbrella mentioned in Nietzsche's notes, Robert Louis Stevenson wrote essays on the handy object, and Dickens used umbrellas as a narrative device for just about everything. She tackles the gender, class, and social connotations of carrying an umbrella and helps us realize our deep connection to this most forgettable everyday object--which we only think of when we don't have one.