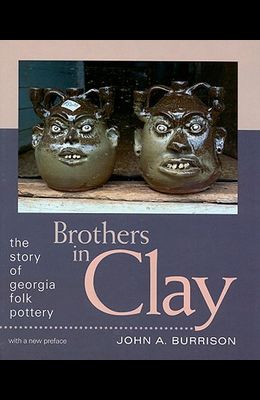 Brothers in Clay: The Story of Georgia Folk Pottery

by
John a Burrison

Abundantly illustrated, Brothers in Clay tells the story of Georgia's rich folk pottery tradition--the historical forces that shaped it and the families and individual artisans who continue to keep it alive. This pioneering book marked the first intensive study of a southern state's pottery heritage and the first major examination of a native Georgia art form. Drawing on interviews with practicing potters, John A. Burrison ranges widely in his coverage, providing discussions of the folk potters' contributions to Georgia life and their place in southern society; detailed explanations of turning, glazing, and firing processes; and histories of the state's eight major pottery-producing centers, including genealogies of the potting families and the distinctive characteristics of their wares. Burrison's new preface summarizes the past decade of southern folk pottery, including archaeological discoveries, museum exhibits, the appearance of important new books, and the deaths of such iconic figures as Lanier Meaders.