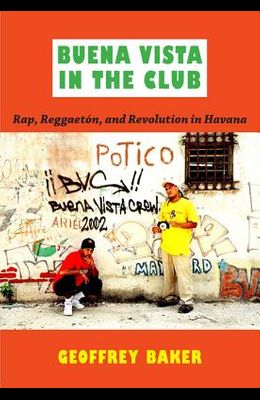 Buena Vista in the Club: Rap, Reggaetón, and Revolution in Havana

Part of the Refiguring American Music Series
by
Geoffrey Baker

In Buena Vista in the Club , Geoffrey Baker traces the trajectory of the Havana hip hop scene from the late 1980s to the present and analyzes its partial eclipse by reggaeton. While Cuban officials initially rejected rap as the music of the enemy, leading figures in the hip hop scene soon convinced certain cultural institutions to accept and then promote rap as part of Cuba's national culture. Culminating in the creation of the state-run Cuban Rap Agency, this process of nationalization drew on the shared ideological roots of hip hop and the Cuban nation and the historical connections between Cubans and African Americans. At the same time, young Havana rappers used hip hop, the music of urban inequality par excellence , to critique the rapid changes occurring in Havana since the early 1990s, when the Soviet Union fell, its subsidy of Cuba ceased, and a tourism-based economy emerged. Baker considers the explosion of reggaeton in the early 2000s as a reflection of the new materialism that accompanied the influx of foreign consumer goods and cultural priorities into sociocapitalist Havana. Exploring the transnational dimensions of Cuba's urban music, he examines how foreigners supported and documented Havana's growing hip hop scene starting in the late 1990s and represented it in print and on film and CD. He argues that the discursive framing of Cuban rap played a crucial part in its success.