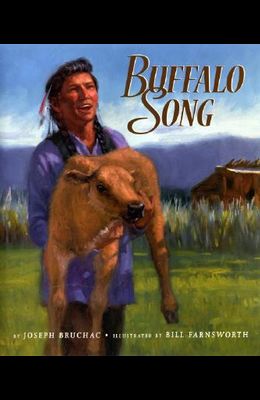 by
Joseph Bruchac and Bill Farnsworth

Walking Coyote placed his cheek against the frightened buffalo calf's side and sang softly. Lone survivor of a herd slaughtered by white hunters, the calf was one of several buffalo orphans Walking Coyote had adopted and was raising on the Flathead Reservation in Montana. For thousands of years massive herds of buffalo roamed across much of North America, but by the 1870s fewer than fifteen hundred animals remained. Hunted to the brink of extinction, the buffalo would have vanished if not for the diligent care of Walking Coyote and his family. Here is the inspiring story of the first efforts to save the buffalo, an animal sacred to Native Americans and a powerful symbol of the American west. From the foresight and dedication of individuals like Walking Coyote came the eventual survival of these majestic animals, one of the great success stories of endangered species rescue in United States history.