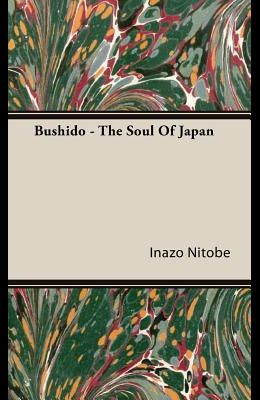 Bushido - The Soul Of Japan

BUSHIDO - THE SOUL OF JAPAN BY INAZO NITOBE DECEMBER, 1904 PREFACE About ten years ago, while spending a few days under the hospitable roof of the distinguished Belgian jurist, the lamented M. de Laveleye, our conversation turned, during one of our rambles, to the subject of religion. Do you mean to say, asked the venerable professor, that you have no religious instruction in your schools? On my replying in the negative he suddenly halted in astonishment, and in a voice which I shall not easily forget, he repeated No religion . How do you impart moral education ? The question stunned me at the time. I could give no ready answer, for the moral precepts I learned in my childhood days, were not given in schools and not until I began to analyze the different elements that formed my notions of right and wrong, did I find that it was Bushido that breathed them into my nostrils. The direct inception of this little book is due to the frequent queries put by my wife as to the reasons why such and such ideas and customs prevail in Japan. In my attempts to give satisfactory replies to M. de Laveleye and to my wife, I found that without understanding Feudalism and Bushido, the moral ideas of present Japan are a sealed volume. Taking advantage of enforced idleness on account of long illness, I put down in the order now presented to the public some of the answers given in our household conversation. They consist mainly of what I was taught and told in my youthful days, when Feudalism was still in force. Between Lafcaclio Hearn and Mrs. Hugh Fraser on one side and Sir Ernest Satow and Professor Chamberlain on the other, it is indeed discouraging to write anything Japanese in English. The only advantage I have over them is that I can assume the attitude of a personal defendant, while these distin Pronounced Boti-shte-doh'. In putting Japanese words and names into English, Hepburn's rule is followed, that the vowels should be used as in European languages, and the consonants as in English. guished writers are at best solicitors and attorneys. I have often thought, Had I their gift of language, I would present the cause of Japan in more eloquent terms But one who speaks in a borrowed tongue should be thankful if he can just make himself intelligible. All through the discourse I have tried to illustrate whatever points I have made with parallel examples from European history and literature, believing that these will aid in bringing the subject nearer to the comprehension of foreign readers. Should any of my allusions to religious subjects and to religious workers be thought slighting, I trust my attitude towards Christianity itself will not be questioned. It is with ecclesiastical methods and with the forms which obscure the teachings of Christ, and not with the teachings themselves, that I have little sympathy. I believe in the religion taught by Him and handed down to us in the New Testament, as well as in the law written in the heart. Further, I believe that God hath made a testament which may be called old with every people and nation, Gentile or Jew, Christian or Heathen. As to the rest of my theology, I need not impose upon the patience of the public. In concluding this preface, I wish to express my thanks to my friend Anna C. Hartshorne for many valuable suggestions and for the characteristically Japanese design made by her for the cover of this book. - INAZO NITOBE. Malvern, Pa., Twelfth Month,

Frequently Asked Questions About Bushido - The Soul Of Japan

0
|   0  reviews
Did you read Bushido - The Soul Of Japan? Please provide your feedback and rating to help other readers.
Write Review

List of All Editions of Bushido - The Soul Of Japan