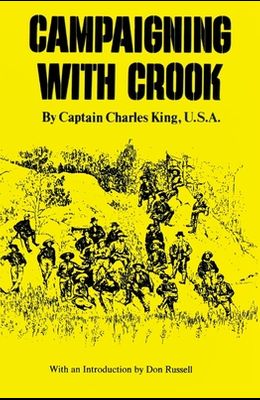 The Big Horn and Yellowstone Expedition in 1876 was successful in scattering the united and victorious Indians of the Custer massacre. Commanded by General George Crook and covering eight hundred miles in ten weeks, the campaign was a hard one on Indians and soldiers alike. Before it ended, many of the cavalrymen were walking-their horses had either died or were killed for food. The Indians had their problems, too. The earlier Rosebud and Custer fights had expended much of their ammunition, their own scorched-earth tactics had destroyed much of their grazing land, and they were pressed so hard by Crook they had little opportunity to hunt. The story of the campaign is vividly told by Charles King, adjutant of General Merritt's Fifth Cavalry. A fine companion volume to newsman John F. Finerty's War-Path and Bivouac (Norman, 1961), King's account presents the soldier's point of view. It also covers the activities of the fifth Cavalry before joining Crook's force, including the fight on the War Bonnet, which succeeded in turning a large group of Cheyennes back to the Red Cloud Agency and prevented their joining Sitting Bull. It was on the War Bonnet that King witnessed Buffalo Bill Cody's famous fight with Yellow Hand, which he recounts in detail. King's book, first published in 1880, presents an articulate and detailed picture of the dangers and privations of Indian campaigning at its toughest. Charles King wrote sixty-nine books, most of them novels based on army life. When he died in 1933, he was credited with seventy years of military service. Don Russell, author of The Lives and Legends of Buffalo Bill (Norman, 1960), has provided an illuminating introduction. He is the editor of The Westerners Brand Book, Chicago, and associate editor of the New Standard Encyclopedia. King's book begins with the departure of the Fifth United States Cavalry from its headquarters at Fort Hays, Kansas, in June of 1876. It is virtually the only contemporary history of the campaign to trace the movement of that regiment to Fort Laramie, to the famous skirmish on War Bonnet Creek, and then through the long march to the headquarters of Crook's Big Horn and Yellowstone Expedition at Goose Creek, Montana.--Wisconsin Magazine