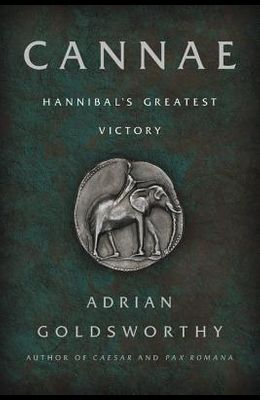 Part of the Cassell's Fields of Battle Series
by
Adrian Goldsworthy

From an award-winning historian of ancient Rome, the definitive history of Rome's most devastating defeat August 2, 216 BC was one of history's bloodiest single days of fighting. On a narrow plain near the Southern Italian town of Cannae, despite outnumbering their opponents almost two to one, a massive Roman army was crushed by the heterogeneous forces of Hannibal, the Carthaginian general who had spectacularly crossed the Alps into Italy two years earlier. The scale of the losses at Cannae -- 50,000 Roman men killed -- was unrivaled until the industrialized slaughter of the First World War. Although the Romans eventually recovered and Carthage lost the war, the Battle of Cannae became Romans' point of reference for all later military catastrophes. Ever since, military commanders confronting a superior force have attempted, and usually failed, to reproduce Hannibal's tactics and their overwhelming success. In Cannae , the celebrated historian Adrian Goldsworthy offers a concise and enthralling history of one of the most famous battles ever waged, setting Cannae within the larger contexts of the Second Punic War and the nature of warfare in the third century BC. It is a gripping read for historians, strategists, and anyone curious about warfare in antiquity and Rome's rise to power.

Cassell's Fields of Battle Series In Order - By Adrian Goldsworthy