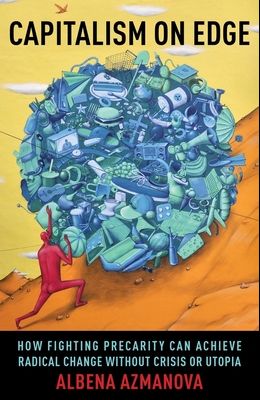 Capitalism on Edge: How Fighting Precarity Can Achieve Radical Change Without Crisis or Utopia

The wake of the financial crisis has inspired hopes for dramatic change and stirred visions of capitalism's terminal collapse. Amid populist upheavals, there has been a new flowering of radical critique, and progressive forces are rallying to fight inequality. Yet is the system indeed on the verge of ruin--or even truly challenged by these developments? In Capitalism on Edge , Albena Azmanova offers a novel diagnosis of the current moment to reveal that the potential for sweeping transformation must come from an unexpected direction. Azmanova demonstrates that capitalism is not on its deathbed, revolution is not in the cards, and utopianism cannot steer us toward a brighter future. In order to renew the potential for radical change, she develops a new critique of capitalism that focuses on the dynamics of the pursuit of profit rather than on forms of ownership and patterns of wealth distribution. Azmanova contends that neoliberalism has mutated into a new form of capitalism marked by a state of widespread precarity. In response, she calls for forging a broad alliance of strange bedfellows, who, despite their conflicting grievances, share an interest in fighting this generalized insecurity. Such a coalition could take on capitalism's constitutive dynamics, not merely its unfair outcomes. Designing non-ideal theory for the problem of radical social change, Azmanova details the prospect of dramatic social transformation without a revolutionary break. An iconoclastic critique of left orthodoxy, Capitalism on Edge confronts the intellectual and political impasses of our time to discern a new path of emancipation.