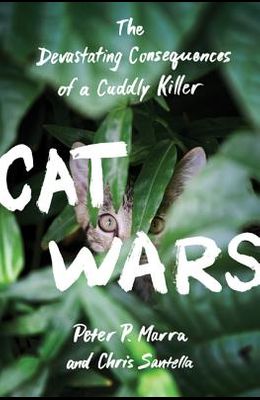 Cat Wars: The Devastating Consequences of a Cuddly Killer

Why our cats are a danger to species diversity and human health In 1894, a lighthouse keeper named David Lyall arrived on Stephens Island off New Zealand with a cat named Tibbles. In just over a year, the Stephens Island Wren, a rare bird endemic to the island, was rendered extinct. Mounting scientific evidence confirms what many conservationists have suspected for some time--that in the United States alone, free-ranging cats are killing birds and other animals by the billions. Equally alarming are the little-known but potentially devastating public health consequences of rabies and parasitic Toxoplasma passing from cats to humans at rising rates. Cat Wars tells the story of the threats free-ranging cats pose to biodiversity and public health throughout the world, and sheds new light on the controversies surrounding the management of the explosion of these cat populations. This compelling book traces the historical and cultural ties between humans and cats from early domestication to the current boom in pet ownership, along the way accessibly explaining the science of extinction, population modeling, and feline diseases. It charts the developments that have led to our present impasse--from Stan Temple's breakthrough studies on cat predation in Wisconsin to cat-eradication programs underway in Australia today. It describes how a small but vocal minority of cat advocates has campaigned successfully for no action in much the same way that special interest groups have stymied attempts to curtail smoking and climate change. Cat Wars paints a revealing picture of a complex global problem--and proposes solutions that foresee a time when wildlife and humans are no longer vulnerable to the impacts of free-ranging cats.

From the Back Cover Very few people enjoy thinking about the calamitous problem of free-roaming cats and biodiversity, and even fewer dare to talk about it openly. Marra and Santella's book is therefore doubly welcome. It's not only important reading for anyone who cares about nature. With its engaging storytelling, its calmly scientific approach, and its compassionate handling of a highly fraught issue, this is also a book that a person might actually read for pleasure. --Jonathan Franzen Cats, most of them unowned free-ranging cats, kill as many as four billion birds in the United States each year. What, if anything, should be done about it? Cat Wars tackles this difficult dilemma. If you are a cat lover, a bird lover, a philosopher, an ethicist, or just anyone interested in gut-wrenching dilemmas, you will find this a gripping book. --Jared Diamond, Pulitzer Prize-winning author of Guns, Germs, and Steel Here, at last, is what native-ecosystem advocates have been waiting for--a complete, dispassionate examination of America's free-ranging cat debacle. It's all here--from the horrendous bird mortality to the cat-borne pathogens blighting wildlife and humans to the cruelty and futility of Trap-Neuter-Return. Everyone gets to speak--including the feral-cat lobby. --Ted Williams, environmental journalist The level-tempered approach of Cat Wars will win many advocates. Anyone interested in the broader topics of a healthy environment and healthy human society will benefit from reading this book. It's as powerful as TV ads featuring the 'crying Indian' in the antilittering campaign of the early 1970s. --Bill Thompson III, editor of Bird Watcher's Digest In Cat Wars , Peter Marra and Chris Santella lay out the extraordinary (and extraordinarily devastating) toll that America's favorite pet inflicts on America's favorite birds. At a time when native bird populations are in desperate trouble, and the number of free-ranging cats has never been higher, the authors bring clear-eyed science and commonsense solutions to one of the most polarizing issues in avian conservation. This is an important book, even if the message is not a comfortable one. --Scott Weidensaul, author of Living on the Wind: Across the Hemisphere with Migratory Birds A great overview of a complex and often emotional challenge. Cat Wars unravels yet another layer of the global decline in biodiversity and frames the potentially drastic consequences of inaction. --Grant Sizemore, American Bird Conservancy Cat Wars is a brave, engaging, and careful accounting of the cats we love and the devastation they inflict on birds and other wildlife. --John M. Marzluff, author of Welcome to Subirdia: Sharing Our Neighborhoods with Wrens, Robins, Woodpeckers, and Other Wildlife