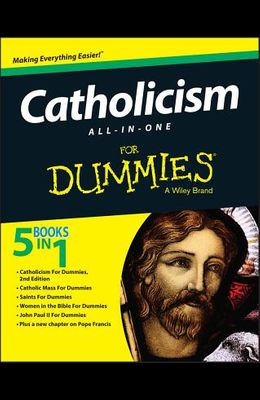 Part of the Dummies Series
by
Consumer Dummies

Grasp the beliefs and practices about one of the world's oldest religions Catholicism All-In-One For Dummies is your all-inclusive guide to the Catholic Church and its billions of followers. You'll learn how Catholicism came to be, how it's practiced, and where it stands socially and politically as you explore the rich history and diverse culture surrounding this major religion. Clear, friendly writing takes you inside a mass to understand what happens there, and walks you through a tour of the saints, holidays, the Bible, and the Vatican. Special coverage includes the role of women in the Church and in the Bible, and the tremendous popularity of Pope Francis, who has quickly become one of the Vatican's most-loved leaders. You'll dive into the beliefs and practices of Catholicism and get answers to the most common, confusing, controversial, and worrisome questions. Catholicism is quickly expanding beyond its 1.2 billion followers, with growing numbers of priests and new baptisms every year. Attendance at papal events has tripled to 6.6 million since Pope Francis' election in 2013, and Catholicism has become the largest religious denomination on the planet by a wide margin. This book explains what makes Catholicism so alluring, giving you insight into the religion and everything it entails. Discover the complicated history of the Catholic church Understand what goes on at mass, and why Learn where the Church stands on important issues Explore Pope Francis's unprecedented popularity across cultures The Catholic Church has been reinvigorated and revitalized with the enthusiasm surrounding Pope Francis, and his openness to the world and everyone in it. If your curiosity has been piqued, Catholicism All-In-One For Dummies is the ideal guide to learning what it's all about.

From the Back Cover 5 BOOKS IN 1 Catholicism For Dummies, 2nd Edition Catholic Mass For Dummies Saints For Dummies Women in the Bible For Dummies John Paul II For Dummies Plus a new chapter on Pope Francis Your all-inclusive guide to one of the world's oldest religions What makes the Catholic Church so alluring? Clear, friendly writing takes you inside the workings of the Church to understand what happens there and offers a tour of the saints, holidays, and the Bible. Plus, you'll explore the role of women in the Church and the Bible and the popularity of Pope Francis, who has become one of the Vatican's most-loved leaders. Catholicism 101 -- find out everything you need to know about Catholicism, from what the Church teaches to what it means to show your devotion--and everything in between Come on in, the water's fine -- get a grip on symbols and gestures, baptism, the Holy Eucharist, confirmation, marriage, and more To love and honor -- find out everything you need to know about the Ten Commandments, from loving your neighbor to avoiding the seven deadly sins The rites and whys of mass -- take a tour of the Catholic mass and understand its foundations, what it means to devotees, how it's changed over the years, and the role of priests In the beginning... -- get to know the saints, angels, and other figures who play a major role in Catholicism, from the Virgin Mary and Jesus to the apostles and evangelists Open the book and find: How to play by the Church's rules The Catholic Church's stance of matters of life and death The lowdown on the ordinary form of mass and its variations Tools of the Catholic mass The role of music in worship A look at saints and holy martyrs Six impactful ladies in the Bible What you need to know about the progressive Pope Francis The popes who became saints