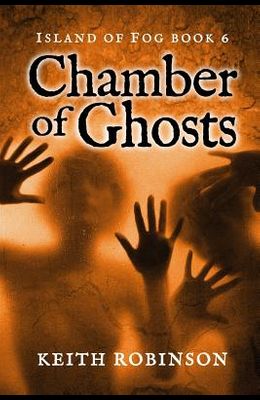 Book #6 in the Island of Fog Series
by
Keith Robinson

All the magic in the region has been nullified by the phoenix rebirth, and without magic, shapeshifters are as ordinary as the village folk. But to the east, outside the blast zone, lies Bad Rock Gulch where goblins mine for geo-rocks. This place has a cavern deep underground known as the Chamber of Ghosts where the shapeshifters might be able to replenish their magic -- to recharge. The chamber is said to be haunted, and it's here that Hal Franklin receives a warning that his life is in danger. What unfolds changes Hal's perspective on everything he knows, and he soon finds himself alone, trying his best to persuade Miss Simone and even his friends to see things his way. Set on a course of action that the others think is foolhardy and dangerous, he's plagued by doubt but resolves to see it through no matter what. With mountain trolls, a village of werewolves, underground ghosts, a boy from Miss Simone's past, and a trio of thundering helicopters carrying a cargo that will change the world, the sixth book in the series literally goes out with a bang.

Island of Fog Series In Order - By Keith Robinson