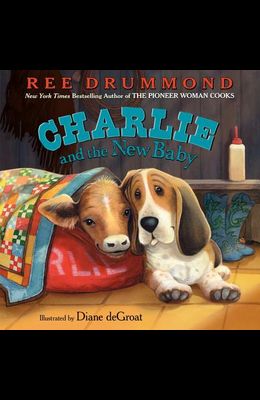 Charlie and the New Baby

Ree Drummond, The Pioneer Woman and #1 New York Times bestselling author of Charlie the Ranch Dog, and her lovable hound are back in Charlie and the New Baby. With expressive illustrations by Diane deGroat, a new delicious recipe from Ree Drummond, and the hilarious antics of Charlie, this picture book is a surefire hit There's nothing that makes Charlie's soul rejoice more than naps and bacon. But when his daily routine of eating and sleeping is interrupted by a new baby calf, Abigail, Charlie is not happy Things go from bad to worse when Charlie sees everyone rubbing Abigail's belly instead of his; feeding her instead of him; and tucking Abigail in at the end of the day in Charlie's bed. Will Charlie be able to adjust to the new addition?

From the Back Cover It sure is nice to be King of the Ranch. Just ask Charlie! His days are filled with belly rubs, bacon, and Mama's special tender loving care. But then his daily routine is interrupted when a new baby shows up! All of a sudden, everyone's attention is on her, and not on Charlie. They tuck her in, feed her dinner, and give her their tender loving care. What is a ranch dog to do? In this heartwarming tale by Ree Drummond--The Pioneer Woman herself--Charlie discovers that even with a new baby at home, there's enough love to go around and that being a big brother is an even bigger job than being King of the Ranch. (Well . . . almost as big!)