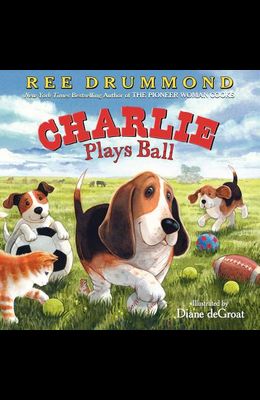 Charlie the Ranch Dog trades in nap time for game time in this sporty adventure by Ree Drummond--#1 New York Times bestselling author, Food Network star, and The Pioneer Woman herself. With expressive illustrations by Diane deGroat, a new delicious recipe from Ree Drummond, and the hilarious antics of Charlie, this picture book is a slam dunk Life on the ranch means lots of time outside, either helping out with the cattle or tossing around a ball with the family. From football to soccer to basketball, Charlie's ready to jump into the game and take his team to victory. But Charlie's favorite part of sports comes after the winning goal when everyone breaks for a postgame meal. He may be more of a benchwarmer when it comes to athletics, but Charlie will always be the MVP of dinnertime

From the Back Cover For Charlie, it's hard work being King of the Ranch. There's napping to do, food to taste, and car rides to take-it's downright exhausting! But it's not all work-there's a lot of play too! There's always a game to join and a goal to score. From football to soccer to basketball, Charlie is ready to jump in and lend a paw to help the underdogs get the winning point. While Charlie may be an all-star on the field, when it comes to his favorite kind of ball, he has to wait until dinnertime. And at the table, Charlie is the MVP! Ree Drummond--The Pioneer Woman herself--delivers a slam dunk with this hilarious new story about Charlie--a basset hound who is truly in a league of his own.