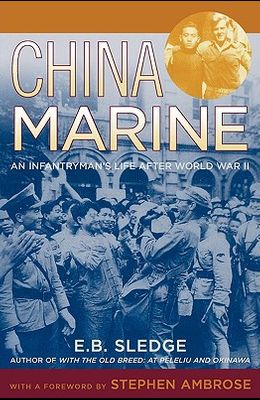 by
E B Sledge and Stephen E Ambrose

See E.B. Sledge's story in the HBO miniseries The Pacific China Marine is the extraordinary sequel to E.B. Sledge's memoir, With the Old Breed, which remains the most powerful and moving account of the U.S. Marines in World War II. Sledge continues his story where With the Old Breed left off and recounts the compelling conclusion of his Marine career. After Japan's surrender in 1945, Sledge and his company were sent to China to maintain order and to calm the seething cauldron of political and ideological unrest created by opposing factions. His regiment was the first Marine unit to return to the ancient city of Peiping (now Beijing) where they witnessed the last of old China and the rise of the Communist state. Sledge also recounts the difficulty of returning to his hometown of Mobile, Alabama, and resuming civilian life while haunted by shadows of close combat. Through the discipline of writing and the study of biology, he shows how he came to terms with the terrifying memories that had plagued him for years. Poignant and compelling, China Marine provides a frank depiction of the real costs of war, emotional and psychological as well as physical, and reveals the enduring bond that develops between men who face the horrors of war.