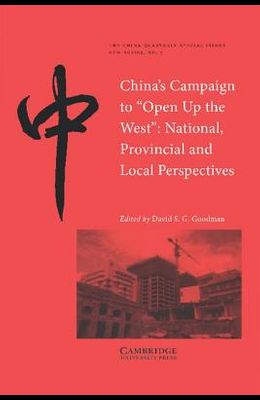 China's Campaign to 'Open Up the West': National, Provincial and Local Perspectives

by
and David S G Goodman and Richard Edmonds

The new campaign to 'Open Up the West' that commenced operations in January 2000 is interesting not only because of its dramatic goal of developing the western and interior regions of the People's Republic of China but also because of the ways it has been articulated. Although presented in some ways as a major state project, it was introduced almost casually into the political process, with none of the usual fanfare and perhaps even more remarkably with no great commitment of state resources. Moreover, though it has been in progress for only a relatively short period it is already clear that uncertainties attend its aims, progress and potential impact. The contested nature of the campaign to Open Up the West becomes particularly apparent if, as is the case here, the topic is approached from provincial and local levels as well as from the national perspective. This book was first published in 2004.