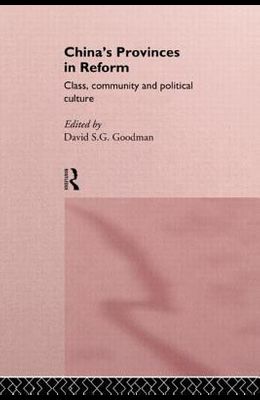 China is a far larger and more diverse country than many people in the West realise. The provinces that make up the country are considerable social, economic and political systems in their own right. They are comparable in size and complexity to European states. China's Provinces in Reform is concerned with the impact of economic reform and social and politial change within the provinces at the immediate sub-central level of the People's Republic of China. One of the main aims of this book is to question over-generalizations about China's development in the reform era. However, the provincial analysis of social and political change in China also has the potential to reveal even more in a comparative perspective. This is the first volume of a series and covers Guangxi, Hainan, Liaoning, Shandong, Shanghai, Sichuan and Zhejiang. It is part of a project conducted by the Institute for International Studies at the University of Technology, Sydney, that will provide the most thorough and up to date analysis of China's provinces yet published.