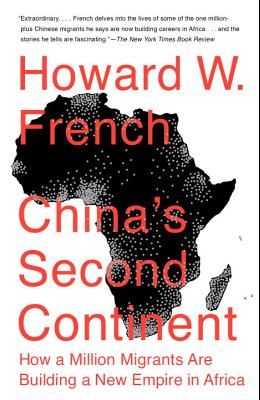 China's Second Continent: How a Million Migrants Are Building a New Empire in Africa

A New York Times Notable Book Chinese immigrants of the recent past and unfolding twenty-first century are in search of the African dream. So explains indefatigable traveler Howard W. French, prize-winning investigative journalist and former New York Times bureau chief in Africa and China, in the definitive account of this seismic geopolitical development. China's burgeoning presence in Africa is already shaping, and reshaping, the future of millions of people. From Liberia to Senegal to Mozambique, in creaky trucks and by back roads, French introduces us to the characters who make up China's dogged emigrant population: entrepreneurs singlehandedly reshaping African infrastructure, and less-lucky migrants barely scraping by but still convinced of Africa's opportunities. French's acute observations offer illuminating insight into the most pressing unknowns of modern Sino-African relations: Why China is making these cultural and economic incursions into the continent; what Africa's role is in this equation; and what the ramifications for both parties and their people--and the watching world--will be in the foreseeable future. One of the Best Books of the Year at - The Economist - The Guardian - Foreign Affairs