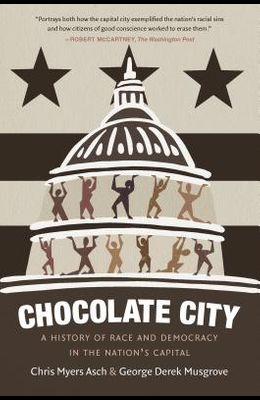 Chocolate City: A History of Race and Democracy in the Nation's Capital

Monumental in scope and vividly detailed, Chocolate City tells the tumultuous, four-century story of race and democracy in our nation's capital. Emblematic of the ongoing tensions between America's expansive democratic promises and its enduring racial realities, Washington often has served as a national battleground for contentious issues, including slavery, segregation, civil rights, the drug war, and gentrification. But D.C. is more than just a seat of government, and authors Chris Myers Asch and George Derek Musgrove also highlight the city's rich history of local activism as Washingtonians of all races have struggled to make their voices heard in an undemocratic city where residents lack full political rights. Tracing D.C.'s massive transformations--from a sparsely inhabited plantation society into a diverse metropolis, from a center of the slave trade to the nation's first black-majority city, from Chocolate City to Latte City--Asch and Musgrove offer an engaging narrative peppered with unforgettable characters, a history of deep racial division but also one of hope, resilience, and interracial cooperation.

Books similiar to Chocolate City: A History of Race and Democracy in the Nation's Capital

List of All Editions of Chocolate City: A History of Race and Democracy in the Nation's Capital