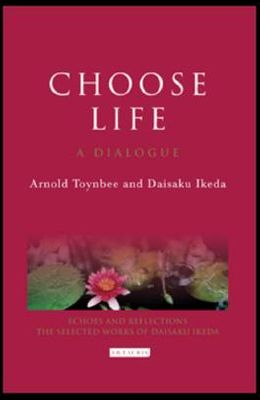 by
Arnold Toynbee and Daisaku Ikeda

Arnold J Toynbee was a historian whose 12-volume A Study of History had a huge impact on the thinking of his day. This epic, multi-volume work offered a grand synthesis of world history from the global perspective of the rise and fall of civilizations, rather than concentrating on the history of nation-states or of ethnic groups. For Time magazine Toynbee was 'an international sage' and certainly in the same bracket as 'Einstein, Schweitzer or Bertrand Russell'. Daisaku Ikeda is a figure of global stature, the spiritual leader of a worldwide lay Buddhist organisation devoted to the promotion of education, culture and peace. Between 1971 and 1974 Toynbee and Ikeda discussed many of the vital issues which confronted their societies in the early 1970s, all of which remain current and significant. Indeed, topics such as the problems of pollution, dwindling natural resources, conflict and war, the role of religion, and population growth, are even more pressing than they were thirty years ago. In this volume - which still reads as freshly as it did when it was first published, and which is now reissued for a new generation of readers - the inspiring challenge issued by both men is framed as follows: will humankind choose to salvage its destiny by a revolution in thinking and morals? Or will disaster ensue if it pursues its present course towards self-destruction and the despoliation of the environment? While recognising that our survival is threatened by the imbalance between human immaturity and technological achievement, the optimistic message of this classic Dialogue is that man-made evils have a man-made cure.