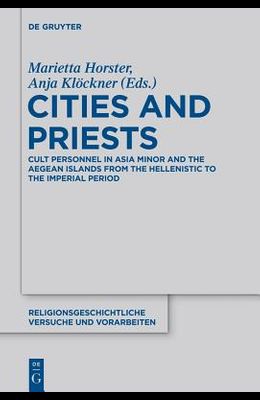 by
and Marietta Horster and Anja Klckner

Cultural records such as dedications, honorific statues and decrees are keys to understanding the manifold and diverse social roles and religious functions of priesthoods in the cities of Asia Minor and the Aegean islands from the classical period to late antiquity. These texts and images indicate how the priests and priestesses saw themselves and were viewed by others. The approaches in this volume are historical, religious, and archaeological, and they elucidate the religious functions that the cult personnel fulfilled for the city, and the perception of priests and priestesses as citizens of the polis . The volume focuses on developments from the Hellenistic period into Imperial times. Subjects include: gendered priesthoods and family traditions, the topography of honorary statues and the presentation of funerary monuments, federal and civic priesthoods as well as priests of private cult-foundations, benefactions and social pressure, and the religious, social and political functions of priests and priestesses within cities.